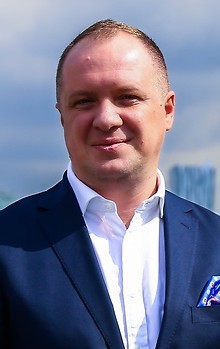 Graduate of the Maria Curie-Skłodowska University in Lublin, master of law at the Faculty of Law and Administration.

From 2000 to 2003 an employee of the Ministry of Communications responsible for cooperation with courier companies. Since 2003 involved in the activity of the regulator for the telecommunications and postal markets. From 2005 to 2014 he was the head of Department of the Postal Market. From 2014 to 2016 he held the position of Deputy President of UKE.

Karol Krzywicki was a co-author of the Postal Law Act and executive regulations to that and other acts falling within the scope of postal market. He was involved in developing regulatory tools, such as the financing mechanism for postal services, regulatory accounting and cost calculation as well as the monitoring system for the quality of service. He contributed to the development of the EU Third Postal Services Directive and to the establishment of the European Regulators Group for Postal Services.

He represented the President of UKE internationally in the Postal Directive Committee of the European Commission, the Administrative Council of the Universal Postal Union (UPU), plenary meetings of the European Regulators Group for Postal Services (ERGP) and the European Committee for Postal Regulation (CERP). He was twice a delegate to the UPU Congress, in 2016 as the deputy head of the delegation of Poland which was elected a member of the Council of Administration and the Postal Operations Council.

On 15 February 2017 Krzywicki was appointed by the Minister of Digital Affairs as the Deputy President of UKE with responsibility for the postal market.

In his private life he is interested in the automotive industry and international affairs.