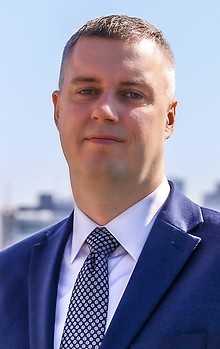 A graduate of the University of Technology and Agriculture in Bydgoszcz in 2000, holder of an MSc Eng degree in electronics and telecommunications.

From 2000, an employee of the Ministry of Communications. A co-author of the "ePoland Strategy for the Development of Information Society" programme adopted in 2001. A former member of the team responsible for the strategy of ICT development in Poland.

In 2006, appointed as Deputy President of UKE with responsibility for telecommunications and postal issues. One of the architects of a demonopolisation process of the broadband market in Poland. A co-founder of a regulatory agreement between the incumbent and UKE. He created regulatory policy for interconnection rates in the fixed and mobile markets and developed the concept of interconnection settlements in the mobile market as well as reference offers for operators with significant market power.

In 2012, appointed as President of the Office of Railway Transport (UTK). Under his leadership the UTK was granted an Emblem and Quality Mark of a "Friendly Office". In the same year, the UTK website received the first prize for the most accessible website to people with disabilities and at risk of digital exclusion in a competition "Website without barriers". From 2015 to 2016, Vice-chair and then Chair of the Independent Regulators' Group - Rail (IRG-Rail).

On 25 February 2016, appointed as Deputy President of the Office of Electronic Communications by the Minister of Digital Affairs.